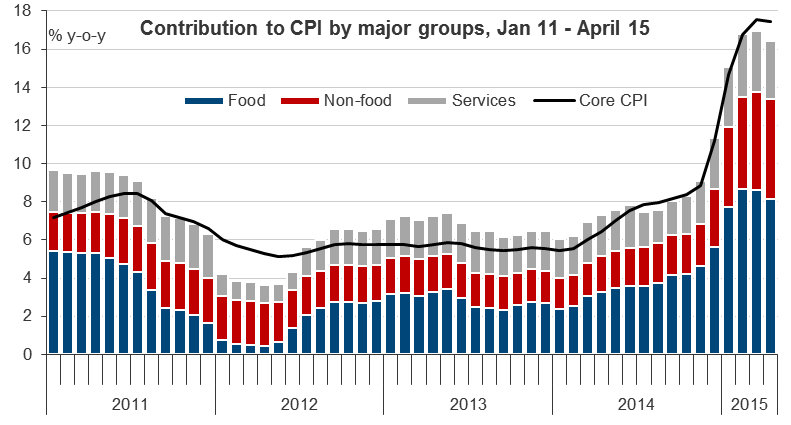 Major contribution to lower inflation came from food prices that increased only 0.3% m-o-m vs +1.6% in March. Stronger RUB probably helped to push back fruits and vegetables prices (-3.7% m-o-m) that surged 67% in the previous 6 months. Start of recession in 1Q2015 and weaker domestic demand helped to stabilize services inflation (+0.0% m-o-m). Non-food prices increased 0.9% m-o-m vs +1.4% in March. So April decline in inflation was broad based.

It is welcoming news as lower inflation would make CBR more confident in rate cutting. If May inflation comes in the same range (about 0.5% m-o-m) we think that another 150 b.p. cut would be announced on next meeting (June, 15th).

At the same time due to high base we estimate that CPI will not fall below 11% in 2015 (Dec/Dec). CBR in last press-release on monetary policy decision stated that expects inflation to reach 8% in next April. It’s a reasonable forecast based on current trends.