CDU TEK published its preliminary production data for March. Oil & condensate production was restored by 0.15 mbd, to 10.25 mbd, after a decline in February 2021. Rosneft's results explain almost 2/3 of the monthly increase, but other majors have also shown positive dynamics. Growing external demand was a significant force driving oil production in March. Export of crude increased by 0.16 mbd (+3.8% m/m). The easing of OPEC+ terms allows Russian companies to increase output further in May 2021 by 60-70 thousand barrels per day. 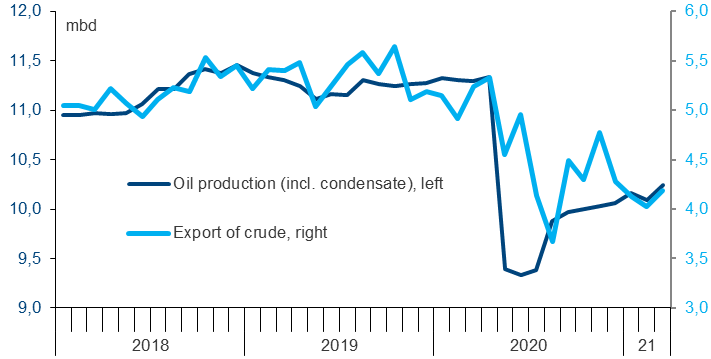 Source: IEF based on CDU TEK

We feared that the February decline might result from technical difficulties bringing back wells that were shut off due to OPEC+. But March results are somewhat optimistic. On an annual basis, oil production in March is almost 1 mbd (-9.3% y/y), lower than in March 2020. Detailed company-level data, which will be published later in April, will help to get more decisive evidence.