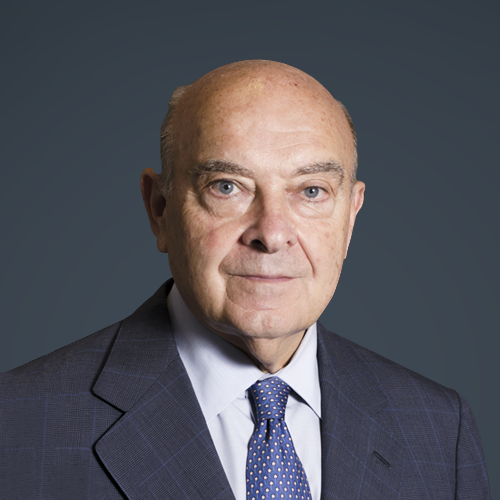 GlobalSource Partners’ Argentina Country Analyst Domingo Cavallo is among the most influential figures in Argentina’s economic history. He was responsible for designing and implementing reforms that liberalized the country’s economy and opened Argentina to international trade during the 1990s. He is often called to bring his deep knowledge and expertise to policy decisions during times of crisis, and to share his broad experience and economic insight to analyze today’s Argentina.

Based in Argentina, Dr. Cavallo is Chairman and CEO of DFC Consulting Associates, an economic consulting firm based in Buenos Aires. He is a member of the Group of Thirty and is honorary president of Fundación Mediterránea, the influential think tank he founded in the 1980s. He has held several professorships, including the Robert F. Kennedy Professor of Latin American Studies at Harvard University, Senior Fellow in Global Affairs at the Jackson Institute at Yale University, and at the Stern School of Business at New York University.

As Argentina’s Economy Minister, Dr. Cavallo is best known for designing and implementing the Convertibility Plan, which linked Argentina’s currency to the US dollar, subduing triple-digit inflation and paving the way for sharp growth in investment rates during the mid 1990s. During that time, he also fostered the deregulation and privatization of key industries, as well as pioneering the establishment of private pension plans. He was elected to Congress twice, including as a deputy from the political party he founded, Acción por La República (now part of Unión por la Libertad) and under which he ran for president in 1999. Finally, he was called upon to serve once again as Economy Minister in a government of national unity during the De la Rua Administration. Prior to his terms as Economy Minister, he was Central Bank President and as Minister of Foreign Affairs, during which he is credited with re-establishing relations with Great Britain after a decade-long break.

In addition to having served in the government and in Congress, Dr. Cavallo is the author of several books on economics and in particular, Argentina’s economy and prospects, including Volver a Crecer(1985), La Argentina Que Pudo Ser(1987), El Desafío Federal(1987), Economía en Tiempos de Crisis(1989), El Peso de la Verdad(1997), Pasión por Crear,(2001), Estanflación(2008) and Camino a la Estabilidad(2014)