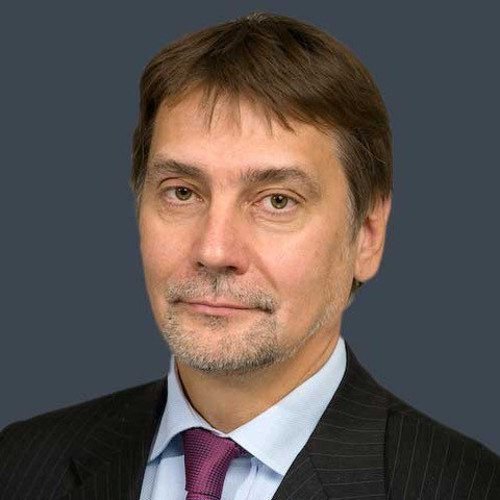 GlobalSource Partners’ Russia Country Analyst Evgeny Gavrilenkov is one of the leading authorities on the Russian economy and the country’s economic transformation. In a career spanning government analytics, academia, and private sector economic analysis, he has consistently ranked among the top economists explaining, analyzing and forecasting the Russian economy.

Dr. Gavrilenkov is also a founder of GKEM Analytica, a research firm focused on macroeconomics and financial markets. In addition, he is the editor-in-chief of Moscow’s National Research University Higher School of Economics (HSE) Economic Journal, the publication he founded in 1997 to produce a better understanding of market economic theory and practice, and Russia’s economy in particular.

Most recently, Dr. Gavrilenkov was the chief economist at Sberbank’s investment arm, Sberbank CIB, where he was consistently ranked in industry surveys as Russia’s top economist. Prior to that, he worked at the joint World Bank-Russian Federation Bureau of Economic Analysis, serving as Deputy Director General and Acting Director General.At the same time, he worked at the Carnegie Moscow Center, where he was a scholar-in-residence and at the HSE, where he served as Dean of the Institute of Macroeconomic Research and Forecasting.

He began his career as an economist at the government think tank Center for Economic Analysis, where he rose to Acting Director, and was a Head of Department at the main computer center at Gosplan (later the Center of Economic Analysis), where he worked on macroeconomic modeling with a focus on interstate trade. He has written numerous papers on issues relating to Russia’s economic opening and growth; its finance, trade, market and energy industry institutions; and on the creation of norms toward credible monetary and fiscal policies in Russia.