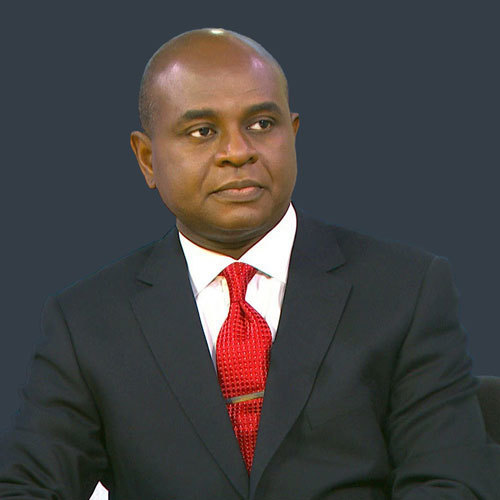 GlobalSource Partners' Nigeria Country Analyst Dr. Kingsley Chiedu Moghalu is one of Nigeria’s premier economists. In a career spanning public and private service, he has served at the highest institutional levels, formulating policy on macroeconomic, social and political issues, including helping steer the country through the 2008 financial crisis.

Dr. Moghalu is also Chief Strategist of Sogato Strategies, a risk management and strategy consulting firm with offices in the United States, Switzerland and Nigeria.

Dr. Moghalu recently completed a five-year term as Deputy Governor of the Central Bank of Nigeria, where he headed the Financial System Stability (FSS) Directorate. In that capacity, he oversaw the regulation and supervision of all the nation’s bank and non-bank financial institutions. He also led the development and implementation of reforms to enhance the stability of banks and other financial institutions in response to the global financial crisis. These reforms included stabilizing the banking system,guaranteeing depositors’ funds, and implementing a four-pillar series of reforms, including risk-based bank supervision, regulating certain types of trading activity, deepening electronic payment systems and encouraging lending to the real economy. To help diversify the economy and increase productivity, he helped formulate an initiative to increase funding for agriculture. As a member of the Board of Directors, the Monetary Policy Committee and the Committee of Governors of the Central Bank, Dr. Moghalu was instrumental in the formulation of monetary policy. In addition, he was a member of the President of Nigeria’s Economic Management team.

Prior to his tenure at the Central Bank, Dr. Moghalu was a Director at the United Nations, involved in legal, management and strategy issues, including as political, legal and human rights advisor in missions in Cambodia and Croatia, and as an advisor and spokesman of the UN International Tribunal for Rwanda.He also served as head and a member of the risk management team of the Global Fund, a multi-billion dollar Geneva-based international development finance organization.

Dr. Moghalu has written several books, including Emerging Africa: How the Global Economy’s ‘Last Frontier’ Can Prosper and Matter. He is sought after by the media for views on the region’s politics and economics and has spoken at institutions such as the Federal Reserve Bank and the IIF. He holds a Ph.D. in international relations from the London School of Economics and an MA from the Fletcher School of Law and Diplomacy at Tufts University, where he is currently Professor of Practice in International Business and Public Policy, teaching a course on emerging Africa in the world economy. He also holds an LL.B from the University of Nigeria and is admitted in Nigeria as a solicitor and advocate of the Supreme Court.